ProMusicLessons.TV Wants to Teach You a New Instrument- Wherever You Watch 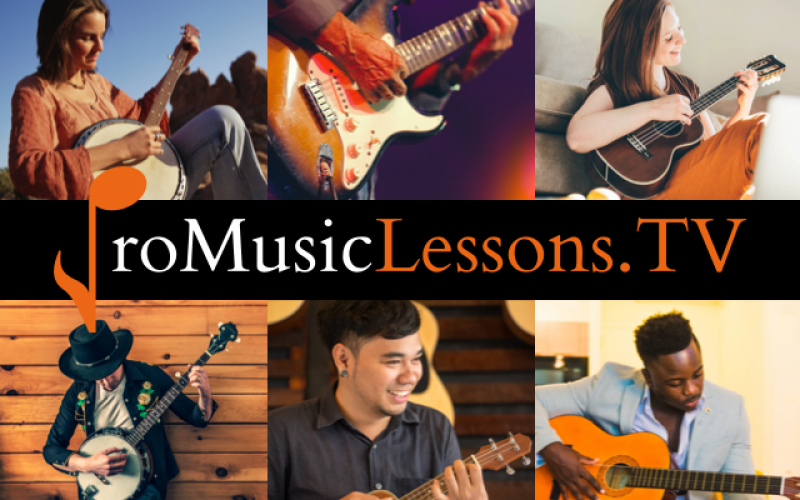 Have you ever wanted to learn an instrument, or to build on skills you already have? Do you want to learn from the best, and get the hang of everything from musical fundamentals to music marketing and business? ProMusicLessons.TV has got you covered. Founded by lifelong musician Joey Edwin in 2012, this music education streaming service is your online destination for instruction in the guitar, banjo, ukulele, and more.

Joey has been a professional musician for many years, playing on cruise lines, in top clubs in major cities, and even appearing on the MTV reality competition show Making His Band, where he was selected out of a pool of thousands of auditioners as one of 40 finalists competing for a spot in P Diddy’s touring band. He’s been an avid player of latin guitar and lo-fi music for years, and has built an accomplished performance career in Chicago- earning endorsements from Guild Guitars, Elixir Strings & EMG Pickups.

Joey started his company as ProGuitarLessons.TV in 2012, hoping to share his years of experience with eager learners on the internet, and offer an alternative to the disorganized landscape of YouTube tutorials- an online space known for questionable teaching methods and distracting, disruptive advertisements. His hope was to employ other great teachers, and offer a platform for students to learn multiple instruments. Unfortunately, he found the process of creating a streaming service to be a bit more of a hassle than he was hoping. “I loved the idea of expanding the platform,” Joey said, “but getting in the door was not simple. I felt like I was being nickel-and-dimed for everything.”

After some less-than-stellar partners left him feeling cold, Joey looked to Odeum to help him support his vision for a great music teaching platform. “I found Odeum from a YouTuber that was comparing different channel developer options. Odeum quickly became my total solution for getting my rebranded channel on all the big platforms without any hefty developer fees or bandwidth overages. To date I haven’t found a more powerful and streamlined company to get up and running in such an organized way.”

With apps launched on iOS, Android mobile, AppleTV, Roku, and Fire TV, ProMusicLessons.TV team can now reach its potential as a first-class instructional platform for music learners looking to get to the next level. Check them out today on app stores or online!

And if you have an idea that you think you could grow with Odeum, check out our pricing plans and get in touch! We want to help creators grow their businesses online with the best tools. We’ll make it simple. But you don’t have to take our word for it- check out what Joey has to say: “I couldn’t believe the process on Odeum was this easy – I’m still amazed at the speed from start to finish! The team at Odeum was so patient and helpful at every juncture. If you want to launch a channel with zero upfront fees give Odeum a try, you’ll be amazed.”